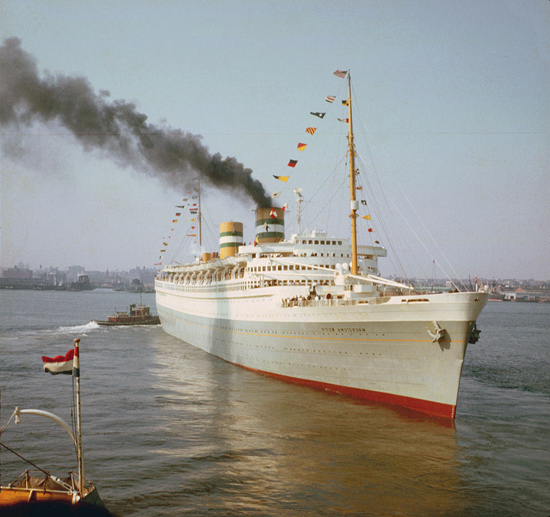 This is a personal little tidbit: When I was 7 and my brother was 9, my mother decided to move us to Paris. She had visited a few months prior and left her notebook in a cafe. She decided it was fate. Or was it serendipity? Anyway, instead of relocating via airplane (boring!), she opted for the slow boat. The S.S. Nieuw Amsterdam. The very same ship pictured here. How she afforded it still baffles me. It was the last transatlantic voyage for this vessel and its Dutch crew. Any passage thereafter was spent in the Caribbean. We departed from a pier on New York’s west side. All the requisite streamers and champagne were there to see us off. It had to be one of the MOST exciting days…ever. Until my mother realized that she had left her luggage sitting on our porch back in Philadelphia. Oops. She was a trooper though, and made the best of an awkward situation. She also quickly made friends, all of whom were happy to lend her a dress here, a pantsuit there (It was the 70s). But mostly she just wore the same thing. We were supposed to dock in Le Havre, but there was a dockworkers strike so we couldn’t make port. Through some stroke of genius, or luck, or both, the trip ended up being extended for a few extra days before finally anchoring in Rotterdam. Photo via Old Chum via Electrospark.

A really nice photo. I was in the mid sixties few times in NYC pier 40 with ss R’dam.
Since my retirement I took up the hobby of having scale replica’s made of the masterpieces of maritime design and engineering of 50 stunning years between 1920 and 1970, a relatively short time spam which has gone forever.